In my thesis I developed a novel method for Caricature Generation. This method was implemented in a program which takes images of faces as input and automatically produces caricatures as output.

The method relied on the notion of “anti-face” in conjunction with the use of unbiased distortion functions. These two concepts constituted the basis of a mathematical set of rules that can be used for caricature generation purposes.

Simply put, the anti-face is the exact opposite of a given face, as depicted below: 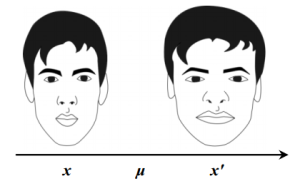 These are some sample results of a program that implemented the method:

Caricatures generated by the program